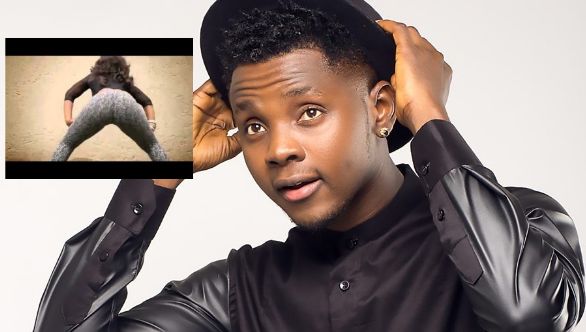 Popular singer Kiss Daniel, in chat with Punch, speaks about his career, ladies and other issues.

How did you come about the name Kiss Daniel?
The name was actually given to me by a girl. Though I was a bit skeptical about it at first, I later liked the idea and decided to stick with it.

When was the first time you knew you wanted to become a singer?
I think I was about seven then. I used to write a lot and when my father noticed my passion, he encouraged me to do more of it. However, I started music professionally in 2014.

You had a great outing with your New Era album, what’s the greatest benefit you have derived from it?
I got an award to show that I had the best album of 2016 and that means a lot to me. It shows that my work did not go unnoticed. The album went viral and I got universal recognition which also makes me happy. I am glad I made the album because initially, I had doubts about its success. I thought it wouldn’t be a hit because I did not feature major players in the music industry. Thankfully, it came out well and the fans loved it.

Do you sometimes wish you featured some artistes on the album?
Yes, I definitely do. However, I believe that’s how God wanted it. It is now in the past and I am currently working on another album which would be released next year. I want to make sure that whenever I drop an album, it will be a resounding success.

Which artistes would you like to work with?
I want to work with a lot of people and I’m still going to do that though I may not be able to tell you their names now.

Who are some of the people that influenced your sound?
I would say 9ice and 2face.

The ladies obviously love Kiss Daniel, what has been your weirdest experience with a fan?
It is X-rated. You know when ladies are excited, they can go to any length to show it.

What’s the limit for you when it comes to interacting with your female fans?I can never take advantage of them or disregard their importance. Even when they greet and salute me on social media, I make sure I respect them.

What’s the utmost gesture of affection a fan has shown you?
I have gotten a lot of that in places like Okrika in Rivers State, London and New York.

What has stardom changed about you?
Nothing, I’m still the same old me. People that knew me from way back still come to me and they can confirm that I haven’t changed. I am an introvert, so there aren’t many people that can influence me. I still hang out with the same set of people I used to spend time with when I was a kid.

Are you not worried that keeping to yourself may make people conclude that you are proud?
I get that a lot but there are always opportunities for people who feel so to meet me and then, they’ll realise that it’s just my nature. I’ve even had experiences like that with people in the industry but when they get to know me better, they see that it’s all love.

What are the major lessons being an artiste has taught you?
I’ve learnt to always keep my mouth shut and not to always talk like a fool. One must always be eager to listen instead of talking. Talking too much will get you in a lot of trouble.

Have you ever been tempted to lash out at some of your followers online who get rude?
I am not that kind of person. I tried it once but I realised it’s not in my nature to do that. People are fond of throwing shots at me but I just laugh about it and move on. I don’t know what the person is going through at that time. That individual may be frustrated and is looking for an avenue to vent his anger and I refuse to come down to the person’s level.

You recently uploaded a comic skit on Instagram, what other talents and skills do you have?
I play the keyboard and guitar and I do comedy as well. I have a lot of skits on my phone and I will be putting them out from time to time. For that particular video you are talking about, I was at home, and I decided to just do something funny and I’m happy I was able to make some people laugh. Whenever I am online, I visit the Instagram pages of many of these comedians and I am inspired by some of what they do. That makes me feel like I can do it too.

If you were not a singer, what do you think you would have been doing?
I would have been an engineer because I have passion for it and that’s why I studied Water Engineering which is similar to Civil Engineering. I love reading books and if not for music, I would still be in school studying for a master’s degree or PhD.

What inspired your song, Sin City?
It is a response to a lot of comments I had been seeing online. There was a time I won two different awards for the Best Newcomer category and some people said that I didn’t deserve it. That was why in Sin City, I said that it’s not like the other guys out there are not cool but I’m the one that was chosen. The organisers of the awards thought I deserved the award and I couldn’t have rejected their good gesture.

You also mentioned in that song that you don’t smoke, is that really true?
Yes, I don’t smoke but I drink responsibly.

Can you date someone in the entertainment industry?
Yes, I can. I don’t see anything wrong in that.

Have you ever dated anyone in the industry?
I’m not sure if I can call the experience that I had dating.

What kind of woman do you like?
I like ambitious women who are intelligent, can think for themselves and envisage the future. There are some women that can tell you a lot of ways to properly spend and invest N10m and you would be amazed. That is the type of lady I want, a woman who can drown you in her thoughts. I don’t want the type of woman that would only think about how to twerk and spend your money. I like twerking and I’m not saying it’s bad but when it comes to choosing the woman I would live with for the rest of my life, I think intelligence is more important. There will come a time when ladies would not be able to twerk again because of old age.

What’s your take on the prominence of boobs, butts and nudity in the entertainment industry?
It is needed as it gets some certain set of people interested in music. As a matter of fact, I know some people who watch videos of ladies twerking first thing every morning. There are some people who wouldn’t watch your videos if there are no ladies flaunting their bums in it and that would reduce your views and followership. For instance, most of the feedback I have gotten on my new music video, Duro, has been about the ladies in it.

What is your contribution to your label mate, Sugarboy’s forthcoming album?We collaborated on two great songs in the album and I prayed for him too, which I believe is very important.

It was once speculated that you only get a little of your concert and endorsement fees while your label takes the lion share, how true is that?
All I know is that I have a lot of money. I am Kiss Daniel, nobody can put me in a box.

What’s the most expensive fashion item you own?
I’m not so much into fashion. I’m more about business and investments.

Apart from music, what other things do you do to earn a living?
I am about establishing a water company that will produce sachet and bottled water.

Has the economic recession affected you in any way?
Recession is a thing of the mind and there are a lot of people weho are still living large. I know someone who recently bought a house of N350m. As for me, I am sure of getting shows every weekend and my bank account being credited with millions of naira. On the average, I perform at about five weddings monthly and sometimes, the figure is higher, coupled with other shows. I am happy that I am making money and I am thankful to God and my fans for that.