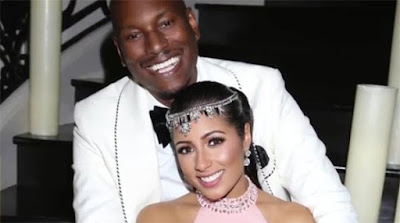 American actor, Tyrese Gibson and his wife Samantha Lee have revealed that they were celibate before getting married

Loading...
The ‘Fast and Furious’ actor who had gone on a radio tour in NYC, to promote his movie ‘Fate of the Furious’ with his wife, were given some air time to divulge details on their coupledom on SiriusXM radio with host, Jenny McCarthy.

According to the couple, they waited 60 days to have sex because of their Christian faith.

‘I’ll tell you proudly, we got active and it was so much magic,’ said Tyrese. ‘We decided to go 60 days without. We decided to become born-again virgins. We’re both Christians. We went from December 14 to February 14. It was hard—I mean, challenging!’

When McCarthy assumed that they ‘dry humped like eighth graders,’ Samantha shut her down saying:
Samantha: ‘No, not even that. We didn’t kiss…”
Tyrese: “We did kiss. I just had to calm you down…”
Samantha: “It wasn’t like that…”
Tyrese: “Baby, don’t be embarrassed it was harder for you to get through the 60 days more than me. Just say it!”
On when they first met:
Tyrese said, ‘We met through mutual friends in Atlanta.’
Jenny McCarthy: ‘Was it love at first sight, Samantha?’
Samantha: ‘The first time I met him I thought he was attractive but I didn’t trust him because he’s Tyrese.’
Speaking on their first date, Samantha said,

‘When we met up again 2 years later. We had a very honest first date. He had reassured me that this wasn’t about hooking up, this was about actually meeting somebody.

Tyrese Gibson and Samantha Lee got married on Valentine’s day, February 14, 2017.
(1) NEW SEX REQUEST We Have been Notified That There is (1) Female Near Your Location that is looking for quick sex only If you are available immediately PLEASE CLICK HERE TO REVEAL HER CONTACT INFORMATION AT NO COST TO YOU This is a free message provided courtesy of this site