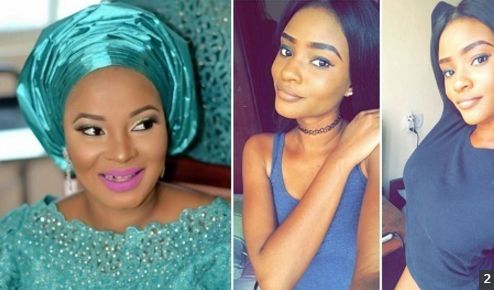 With drawn and solemn looks on the faces of the people seated, it was all too apparent that grief was the reason for their gathering. Bitter hisses were accompanied by intermittent wails to create an unpleasant soundtrack of sorrow and tears.

The above scene played out at the Isheri-Magodo, Lagos, home of actress Moji Olaiya, who died last Wednesday. Even though the actors involved would have wished it to be so, it was not a movie set. It was for real.

The actress is said to have died in Canada, two months after she delivered a daughter. Her first daughter, 20-year-old Adunoluwa, was expectedly badly shaken upon hearing the news of her mother’s death. The young light-skinned girl wailed bitterly and had to be taken to a secluded room to sleep.

When Sunday Scoop visited the residence the next day, Adun was calmer and more composed and she sat under the canopy erected in the compound to receive guests. Many of the well-wishers hugged and commiserated with her.

In a brief chat with our correspondent, it was clear that the pain was still raw in Adun’s heart as she said, “This is the worst kind of news anyone can hear. I spoke with her on the day she died and nothing prepared me for this bad news. I will miss her love and care, because she always provided anything I wanted.”

On how the funeral rites would be handled, Adun simply said, “I don’t know at this point. It is the family that will take care of that.”

Meanwhile, Sunday Scoop also gathered that Moji had gastric ulcer, which likely led to complications during childbirth, which was done through a caesarean section. She was said to have been certified okay by her doctors after the delivery but that she complained shortly after of pain and discomfort. It was also gathered that Moji still spoke with a friend of hers about three hours before she died. According to her grieving relatives, the complications started suddenly and within a short time, she was dead.

Many of her colleagues were present with teary eyes and gloomy countenances. Popular actress, Faithia Balogun-Williams spent a long time with Moji’s mother in a room away from other sympathisers, and when she came out, she briefed her colleagues including Kemi Afolabi, Yomi Fabiyi, Foluke Daramola-Salako, Bimbo Thomas, Bisi Ibidapo-Obe, among others.

When Sunday Scoop approached her, Faithia said, “It is a sad occurrence and nobody is happy about it. I am not in the right frame of mind to say anything now”

In the condolence register opened at the house, many of Moji’s relatives, friends and fans expressed their condolences.

“It’s so sad to lose you at this point. God understands. I met you once and it is a memory I’ll always keep,” wrote Pastor Bartlette.

Popular actress, Fausat Balogun, aka Madam Saje simply wrote, “I don’t even know what to say.”