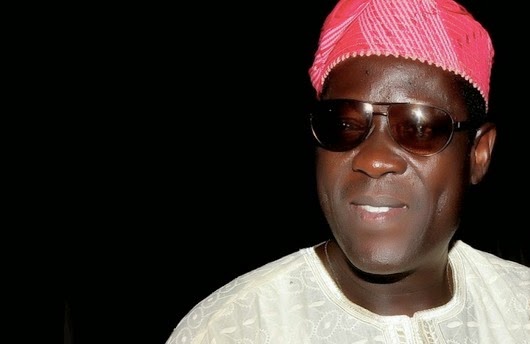 Do you feel accomplished as an actor?
Yes, I feel fulfilled and I thank Almighty Allah for his mercies and goodness. As far as I am not dead, I am still working to be better at everything I do. So far so good, I give thanks to God.

It is a popular belief that you are a womaniser because women flock around you
I am not a womaniser, I just believe that people surround me because of the love God has for me. It also depends on how you present yourself to people. I believe in self control because if you have s*x with every woman that comes your way, then your life is in danger. If I indulge in such acts, I will not look as radiant as I am at my age. Most likely I might have contracted various diseases. If I were a womaniser, I would have thought I contracted a s*xually transmitted disease during the time I was critically ill.

How did you meet your first wife?
We were in the same theatre group and I admired her a lot. I saw her and I was interested in her. I told her that I would like to marry her and she agreed. I later married another wife but I believe everything in life has to do with destiny. I vowed that I would not have a second wife because I never fancied polygamy but it happened and I believe it was for a reason. It is God’s doing.

When you told her you wanted to marry another wife, how did she react to the news?
She felt bad and I begged her. May God give us a good wife; if I had money I could have bought a hummer jeep to beg my wife but I am not that rich. I made her understand how it happened and that regardless, it would not change anything between us. I begged her to please accept it as our destiny and I appreciate her for her understanding.

But some women will either pack out of the house or make it unbearable for the man. Did such a thing happen to you?Not at all, she did not do any of that. I asked my younger brother and two of my sisters to help me beg her. When they begged her, she said she believed that it is destiny.

What is the atmosphere in your house?
One thing I like about my first wife is that she encourages me to help people, especially my family members. She always makes sure I satisfy them if they need my help. When my mother was alive, she took good care of her. God is the only one that can forgive us our sins and I pray that he forgives me. I also pray my wife forgives me.

How were you able to combine your civil service job with your acting career?
I always made sure that any production I partook in was on a weekend or during my annual leave.

What was your ambition as a child?
To be honest, all I knew was that I wanted to be someone great in life. I never knew that I would be involved in the entertainment industry while growing. I just admired the glitz and glamour. I think my love for entertainment can be traced to the fact that I come from a family that is deeply rooted in the Yoruba culture and tradition. We are masqueraders and I know how to praise people and chant very well. When I started acting, producers loved giving me the role of a traditional chanter because they knew I could chant ‘ewi’ and ‘oriki’ very well.

Since you began acting in 1981, has there been any time you felt like quitting?
Never. Such thought has never crossed my mind.

So you never had a challenging moment?
Of course, there were challenging moments but they were not enough reason for me to quit. Things are better now because back then, we did not get any financial gain from our profession. The people that enjoyed being actors were those whose parents were rich enough to sponsor their projects. Back then, if you were unable to produce a movie, it was difficult to become a success in the industry because you would always rely on stage plays to survive. When I produced my first movie, some people were shooting theirs for less than N20,000 but because I knew what I wanted, I aimed higher. I knew what it meant to produce a quality movie and I spent over N70,000 on my project. The Wicked Boy was my first movie and I shot it in 1993 in two parts. It was a big success and it sold very well. I produced a movie that I was paid a royalty of over N2m in the 90s. Now pirates have messed everything up for us.

How much were you paid for the first movie you ever featured in?
During that period, we could not charge. We were satisfied that we featured in movies. We were just doing solidarity jobs for ourselves. Gradually, we started charging and the highest we were paid then was N300. We suffered a lot before the industry became what it is today. There was a time a man called me for a job; he wanted me to chant in his movie. When he saw me, he did not believe I was an actor because of the corporate way I dressed. Then I was still a mechanic with the Lagos State Water Corporation but you would not know. When he asked me to name my price, I said N600 for starters but he could not meet up. He said that the lead character was charging about N400. I declined the job. In 1994, the highest paid actor charged about N1,500. I was paid N1,200 in 1991 for Omo Yoruba, that was the very first movie that I was paid big money.

How did you feel when you were paid such a huge amount compared to what your contemporaries were earning?I did not see it as a big deal because I was already working; although it was a huge sum in the 90s. At that time, you could not finish N2 in any restaurant except you were a glutton because naira had value then. From the location that I collected N1,200, I went to Ado-Ekiti where Fadeyi Oloro was shooting his movie and he paid me about N850. Within a week, I could make as much as N2,000. Don’t forget that I was earning salary as a civil servant. So, I lived like a king.

When you fell very ill, it was rumoured that you peddled cocaine and it got burst in your belly
I do not even know what cocaine looks like. Of course, I heard the rumour but an official of the National Drug Law Enforcement Agency once told me that no one survives it when cocaine bursts in the belly. It is normal for people to peddle rumours against a popular person. Some people are image makers while others are image breakers. While I was ill, a journalist very close to me published that I had AIDS. When I became healthy, he began to dodge me. When we eventually met, I told everyone present to thank him for me because without his write-up, even though it was false, no one would have known that I was very ill and I could have died.

When you were very sick, did it ever occur to you that you might die?
Of course, it was only natural for one to have such thoughts at that period. I began to have the feeling that I might lose my life after I had sought for help at several places but found none. I spent a lot of money while taking care of myself.

What lessons did you learn from your illness?
I learnt that it is not everybody that truly likes you. We have a lot of entertainers in Lagos but only a handful cared enough to check on me when I was ill.

How were you able to regain your stature because you looked very frail when you were ill?
That is the work of God because I did not use any drug to regain my stature. I had chronic ulcer so I had to be eating well; the only thing I could not do was exercise. I am getting over it because ulcer can only be managed and not totally cured.

How did you venture into music?
It has always been a part of my family heritage. I released an album titled Appreciation in 2009. I did it in America and I found out that it was well accepted, so I came to Nigeria to do the same thing but the marketer ran away with my N2m. After a while, I decided to produce another album and I am grateful to my fans because the feedback has been great. The acceptance of the first album encouraged me to do another album. I did not make money from the first album but I was happy with the feedback that I got.