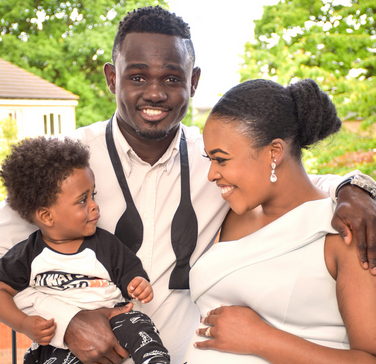 Gideon Yobo, the younger brother of footballer Joseph Yobo and his wife, Blessing are expecting their second child. The couple, who got married on June 27, 2015, in Liverpool, England, welcomed their first child, Caleb G.I.D Williamson Yobo, who turned a year earlier this year.

Blessing posted the photo on her Instagram page and wrote: “and…then there was 4. Thankful and blessed”

Before getting pregnant, Blessing had been diagnosed with lupus, an incurable illness affecting the immune system. She was advised not to get pregnant. And when she got pregnant, doctors in the UK where she resides with her husband, told her that her pregnancy will not go beyond 14 weeks.
Loading... 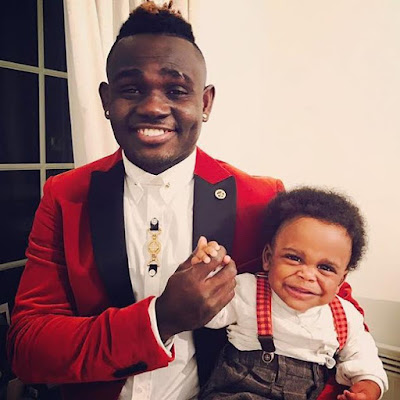 They were advised to terminate the pregnancy at the 10th week.
“The doctors suggested we should think of stopping the pregnancy, but we both decided beforehand that whatever happens, whatever the risks, we would carry on. We just knew it wouldn’t end up in disaster and put our trust in God. Everyone was shocked when she got to 20 weeks, and then we just carried on.”Yobo told Telegraph and Argus.
Due to the high risks involved, doctors at BRI monitored Blessing Yobo very closely throughout her pregnancy, and despite periods where they admitted she had been “very ill”, she was successfully induced at 37 weeks.
“When Caleb was born, everything was just perfect. They did tests on him, some of them three or four times, and the doctors couldn’t believe he had come out fine. Some people would have given up, but we were determined not to. We held on to our faith and beliefs and followed our gut instinct. She is doing fine, and Caleb is just fantastic. We registered him the other day and the medical records are flawless, everything is ok. I always knew he would be a miracle baby, and that’s what the doctors said he was. They said they couldn’t believe our determination and belief, but Caleb just shows that miracles do happen” Yobo said Lupus UK, an NGO dedicated to the research of Lupus.
They stated that women diagnosed with the disease when they become pregnant run the risk of suffering greater problems during pregnancy, and were more likely to need additional drug therapy as the disease could affect the development of the baby, as well as making the mother unwell.
Experts advise that potential mothers have their lupus under control for at least six months before trying to become pregnant.
The charity said that a study had shown that women who have active lupus within three months of getting pregnant, as in the case of the Yobo’s, were four times more likely to lose their babies. Other complications can include a three-fold increase in babies being born prematurely, around 35 per cent of pregnancies suffering pre-eclampsia, and a higher risk of poor growth of babies resulting in stillbirth. Paul Howard, a projects manager at Lipus UK says
“The risks for complications during the pregnancy, such as a miscarriage, are real. If the lupus is active, there is an increased chance of a flare-up during pregnancy, which can lead to foetal loss and the mother risking her own health. We would advise people not to get pregnant until their lupus is under control. Lupus is a very varied condition, and the fact that there is a better understanding now of the risks during pregnancy is increasing the likelihood of cases such as this one having a happy ending. But, it certainly sounds like this couple have been extremely lucky. We wouldn’t advise high-risk pregnancies with active lupus, as having a healthy mum and baby is definitely against the odds, especially for someone with kidney problems. But stories like this do happen, and they are wonderful to hear” he said.
(1) NEW SEX REQUEST We Have been Notified That There is (1) Female Near Your Location that is looking for quick sex only If you are available immediately PLEASE CLICK HERE TO REVEAL HER CONTACT INFORMATION AT NO COST TO YOU This is a free message provided courtesy of this site