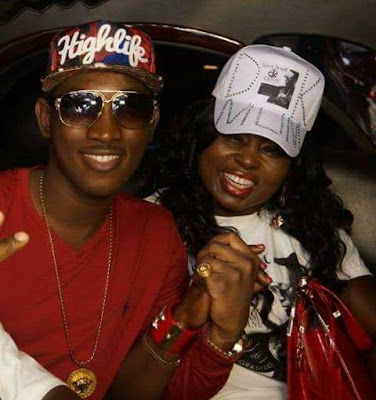 Dammy Krane’s mother, Elizabeth Adeola Oshodi, has issued an official statement on his arrest for theft, fraud and grand theft in Maimi, US. The singer was on Friday, 2nd of June, arrested for grand theft allegations, credit card fraud, and identity theft. He is currently being held in jail at the Miami Dade County Corrections as he awaits to meet his bond requirement.
In a statement issued through her Facebook account, the singer’s mother claimed that Dammy Krane’s flight ticket and hotel bookings were fraudulently purchased by a show promoter before he got arrested while trying to board a flight from Maimi to Washington.
In the statement, she also said the singer will clear his name in court and advised all artistes to purchase their ticket by themselves to avoid a similar incident.
Read her full statement below..
As an artiste, promoters book your hotel stays and often buy your destination tickets. It’s never once crossed our hearts as a performing entertainment family, to have to verify that the sources of bookings are legitimate. And please, keep in mind that we’ve been in the industry for almost 15 years. Then came the unfortunate past Friday, when Dammy Krane got arrested trying to board a flight from Maimi to Washington: Maryland. His ticket and hotel bookings were fraudulently purchased by the next show promoter (s). And because of Dammy Krane’s fame, all accusatory hell, broke loose.
We thank God for His goodness and the great spirit of truth. He will have his day in court to clear his name. He will give his personal press release shortly l, however, have decided to speak up against insinuations of fraudulency and grand theft. Dammy is a truly gentle and honest citizen of our planet and remains a good ambassador for not just the music industry, but Nigeria as a whole.
I also will like to seize this rare opportunity to warn all promoters, entertainers, the music industry, the performing arts world & all travel-prone individuals to , from now on;
1.) Buy your tickets yourself.
2.) Ensure by prior verification that your ticket and hotel reservations match the purchaser’s info.
How? By declining emergency arrangements that do not give up to 24 to 48 hours to allow you call the airlines and hotels for verifications. Remember to always give the option for promoters or show organizers to buy all bookings and must accompany with the booking profiles: the names used for bookings, and phone numbers must match your designated or named offers, or they will need to send the cash in their verifiable names to your business account.
It hurts so bad that fellow Nigerians will do such a damaging act to another, knowing that the repercussions could be so devastating. We are aware of the implications at hand and pray for your faith in our purity, even as we beg for your patience to let the law take its’ course, before jumping to unfair conclusions.
We remain humbly grateful for all the innumerable support and overwhelming show of love to his family.
We thank you.
(1) NEW SEX REQUEST We Have been Notified That There is (1) Female Near Your Location that is looking for quick sex only If you are available immediately PLEASE CLICK HERE TO REVEAL HER CONTACT INFORMATION AT NO COST TO YOU This is a free message provided courtesy of this site