Singer 9ice sat down for an interview with veteran TV personality Funmi Iyanda and they got to discuss 9ice’s broken marriage specifically and marriages in general.

Iyanda recalled the last time she saw him was at his house when he was still married to his first wife. She said she was sad that his marriage hit the rocks and asked if he was married again as the papers report. This he denied.

When Funmi asked him to clear the air on his status, the Gongo Aso singer launched into an explanation on the problem with modern day marriages.

“I’m single but I’m not searching because it’s not part of my priority right now. I’ve dealt with this topic so many times and people just tend to take the negative side of it but it’s like they don’t understand what I’m saying because they’re not in my shoe.”

Loading...
He continued: “Marriage is not for this generation… I have my reasons(for saying that) because, as a Nigerian, as a Yoruba man, there are some culture and tradition that you’re being taught when you’re being brought up as a man. You want the same thing from your wife (but) you’re not going to get it from today’s woman. because then we have exposure. They are the ones that sent us to school. And I still want my woman to serve me food and kneel down. Ejo Aunty, who’s going to do that for me now?”
He added: “but you’re not going to get that as a man, so we today’s men, we need to get that into our thick skull that you’re not going to get the same thing your mom is giving to your dad. You are going to get something different because who you’re getting married to is quite different from your mom. But we are not ready. That’s why you see that this generation are losing marriages, six months and it’s dissolved. 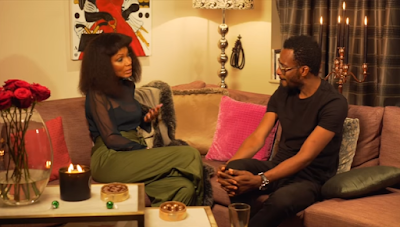 He went on to advise people to marry for the right reasons and not out of societal pressures and asked that people are certain beyond all reasonable doubt before going into marriage. He warned couples not to go through with marriages if they become uncertain before walking down the aisle.  Citing his wedding as an example, the father-of- four revealed that he had a moment of doubt before he tied the knot but had to go through with it for fear of what people will say.
“Before you go to the altar, like five to ten minutes, your mind will be telling you that this thing is not going to work,” he said and when Iyanda asked if that happened to him, he replied, “It happened to me, but I felt it because I was like ‘come on, I have so many things to lose more than what I’m going to gain’. Because if I do that, it’s like I’m against the rest of the world.”
He advised: “So we should hundred percent get married for what will make you happy. Regardless of the culture, regardless of your parents, get married because you want to get married. Get married because it will make you happy. Don’t get married because Tinuke got married.”
(1) NEW SEX REQUEST We Have been Notified That There is (1) Female Near Your Location that is looking for quick sex only If you are available immediately PLEASE CLICK HERE TO REVEAL HER CONTACT INFORMATION AT NO COST TO YOU This is a free message provided courtesy of this site