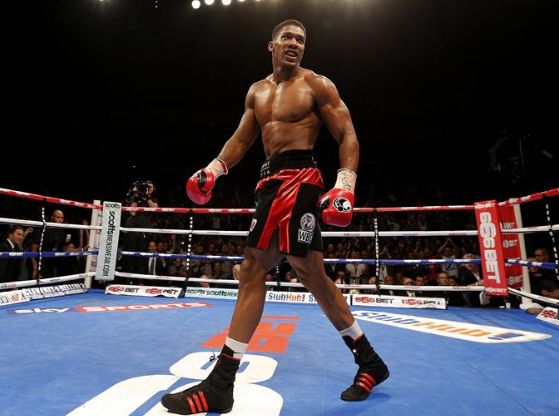 1. Boxing Champion of Nigeria ancestry Anthony Olufemi Joshua wanted to represent Nigeria at the 2012 olympics. But a coach in nigeria told him there was no chance. Joshua reportedly asked to join Nigerian trials but was told that if he was good enough, he’d represent England instead of coming back to Nigeria. [A coach has denied this, saying he reported late to camp in Nigeria]

2. Joshua was born to a Nigerian mother and a father of Nigerian and Irish descent. His cousin is fellow unbeaten professional boxer, Ben Ileyemi. The pair made their professional debut together in 2013.

3. Joshua grew up much of his early years in Nigeria and returned to U.K Halfway through Year 7 to join Kings Langley Secondary School. He became a boxer in 2007 at the age of 18 after he was encouraged by his cousin.

4. As an upcoming boxer, Joshua won numerous bouts and competition which made him a kid to watch out for. In 2011, he made it to the world amateur boxing championship in azerbaijan where he won silver medal. He won a Olympic gold for Great Britain at the London Olympics in 2012. As an Amatuer, he won a gold medal in the super heavy-weight division at the 2012 Olympics.

5. As of march 2016, Joshua is ranked the world’s 8 best heavy weight boxer by the ring magazine. And currently boasts of a 100 percent knock out ratio.

6. He has won all the 15 bouts of his professional career.

7. He worked as a bricklayer before taking up boxing full time.

Today he’s a World Champion.
(1) NEW SEX REQUEST We Have been Notified That There is (1) Female Near Your Location that is looking for quick sex only If you are available immediately PLEASE CLICK HERE TO REVEAL HER CONTACT INFORMATION AT NO COST TO YOU This is a free message provided courtesy of this site