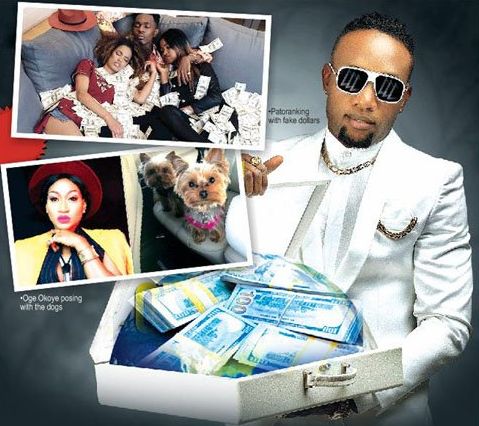 As written by Adewoyin Adeniyi Show off is undeniably a part of the entertainment industry. As a celebrity, the fans are interested in the everyday life of their star. They want to know what they are up to, their net worth, the kinds of houses in which they live, the cars they drive and even their bank statements.

But it becomes somewhat baffling the length that some celebrities can go just to ‘meet up’.

It is not news that posting of cash and other valuables are putting the celebrities at risk of robbery or kidnapping because even robbers and kidnappers are on social media using the medium to hunt for their victims.

But some Nigerian celebrities are “falling our hand” these days with their newly found attitude of “stealing” other people’s pictures and posting it on their social media account, claiming to be theirs.

First, it was Nollywood actress, Oge Okoye, who screenshot American TV star, Kenya Moore’s pet dogs, claiming them to be hers.

In the post, the actress captioned the pic of the two dogs “Yiipeeee!!! My new babies just arrive,’ she even named the dogs Rob and Rosy but all thanks to Kenya Moore’s fan page that discovered on time and called her out, branding her as “some lady in Africa”.

The most recent is that of Five Star music front man, Kcee, who has hit songs like Limpopo, Pull over and Okpekete. He posted a stash of dollar bills and wrote, “’No time, God I give you praise. Just for one day #desire #mrromantic #romanticcalls.”

However, it did not take long for Kcee to be busted when the real owner of the cash, came out.

Aside being an artiste, Kcee is thought to be rich considering that he has a younger brother who is acclaimed to be a business mogul and also doubles as the CEO of his Five Star music.

But some comments already lambasted the artiste, one of which was, “Kcee must you be fake to have a life and who cares how much you make you have to grow up and leave this shits for upcoming artistes? Show me some of the things you are doing to change lives not stolen pic of money.”

Another follower who was disgusted by the act wrote, “seeing is believing, Kcee is a disgrace!”

A similar case was that of dancehall singer Patoranking who was busted for flaunting a fake Yeezy Boost and dollar bills on Instagram. The singer was busted by an Instagram account dedicated to spotting fake and original products of Kanye West’s footwears. The account also said the dollar bills Patoranking flaunted were fake.

Although Patoranking was quick to put the blame on his wardrobe manager, saying he wasn’t aware the foot wear was fake. But what about the dollar bills? Wasn’t he aware they were fake too?

Nobody is dragging riches with you, don’t be forming what you are not. Stay humble.