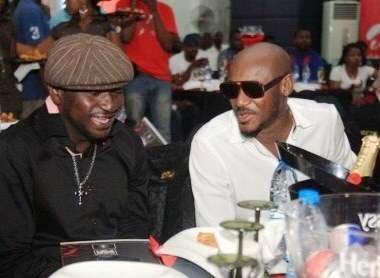 Former member of the defunct music group, Plantashun Boiz, Ahmedu Augustine aka Blackface, says he has institued a Lawsuit against Innocent Idibia aka 2face for allegedly singing his song, Let Somebody Love You, without his permission. 2face released the song in his album, Ascension in June 2014.
In an exclusive chat with LIB, Blackface says he wrote the song when he and 2face were still members of Plantashun Boiz. According to him, he is taking legal action because 2face sand the song without his permission and is now collecting royalties on the song.
“2face sang my song, Let Somebody Love You,  without my permission. He knows I have the song when we used to be together and work together. He knows it is my song because he has other songs as well that I know he had but its not my song so I can’t sing it”he said
On whether there was any contract binding them as regarding which song each of them wrote, Blackface said
“There was no contract binding us but he knows that it is my song and he knows that he shouldn’t have sang that song without taking permission from me to sing it just like I told him to sing African Queen because he wouldn’t have sang it without me giving him the permission to sing it”.
On whether he has filed a lawsuit now regarding the matter, Blackface said yes and that his team and that of 2face have been corresponding.
“Yes. We have been corresponding with them. They have been replying us and writing us back. When the media would ask them, they would say nothing like that. My lawyers have been writing to 2face’s people and they have been replying”.
Asked if there is any evidence to prove that they have indeed being corresponding, Blackface said yes but says he cannot release them. According to him, 2face and his manager know that they are guilty and are doing everything to make him fade away from the music Industry
“They know they are guilty and they are running away. They just hope that I fade away with what the Industry is trying to put of Blackface so that they can claim they are the ones that have the song and be making the money from it”.
Blackface said when they finally go to court, he has evidence to back up his claim that he owns the song
“Of course I have things to back up my claims but I just can’t show them to you. I would have put them  online for people to know that I am not joking and that I really mean it but there is no need to put it out. They know what I am talking about. So I don’t need to go too far into that”.
Asked what Faze, member of their defunct group thinks of all of this, Blackface said
“I  don’t know what his stance is because Faze is somebody that likes peace. He doesn’t like trouble. He is not happy too but he just can’t tell you guys that he is not happy with what has been happening because the media has a way of always taking sides. Somebody can be wrong but the media would try to take sides with the person. Like this issue of taking  my song is one of them. They took my song. Why can’t they prove that they didn’t take my song? If you listen to the song, you would see that the second verse of the song is quite different form the first verse. So he couldn’t have written that song. The reason why I am talking is because all this things have to stop. It has to stop because if I don’t tell them to stop taking my songs, from next year, they would be going to another of my songs. I am not doing this because of any kind of problem or because I hate somebody but the nanager cannot publish my song. Why are they going to publish my song when they know it is not their song? and they publish it and keep collecting ringtone money, publishing money, caller back tones money and digital online sales money. That is really really wrong without giving the person due credit. That is my stance. It doesn’t matter if we used to know each other before. I know he has other music that he used to write those days but I can’t sing them because they are not mine. So why is he singing mine without telling me”
Asked what is the name of the chambers where the case was filed, Blackface says he would have to get back to us on that.
LIB reached out to 2face’s manager, Efe Omorege to confirm if indeed there has been a legal correspondece between their legal team and Blackface’s legal team. Omorege refused to comment on the issue.
“I don’t have any comment to say regarding Blackface. I have absolutely nothing to say about Blackface. If Lawyers are having a conversation, then the lawyers should have the conversation. I have absolutely no comment. I don’t even want to mention the word Blackface”he said
(1) NEW SEX REQUEST We Have been Notified That There is (1) Female Near Your Location that is looking for quick sex only If you are available immediately PLEASE CLICK HERE TO REVEAL HER CONTACT INFORMATION AT NO COST TO YOU This is a free message provided courtesy of this site