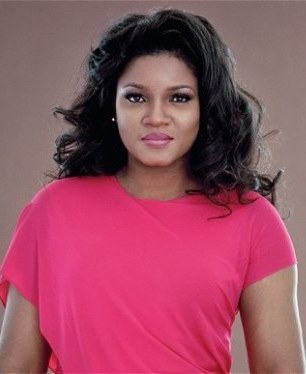 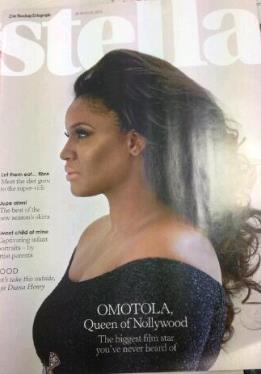 Omotola Jalade Ekeinde, aka ‘Omosexy’, is the queen of Nollywood. She’s appeared in more than 300 films, pulls in 150 million viewers for her reality-television show and has been named one of the 100 most influential people in the world.

She scores a zero on the Hollywood Richter scale. She has never starred in a major motion picture. Her most recent film, Last Flight to Abuja, means nothing to devotees of Netflixand LoveFilm.

When she sat next to Steven Spielberg at a Time magazine dinner earlier this year he didn’t know her name. Yet Omotola Jalade Ekeinde was attending that dinner because, like him, she had been honoured in Time’s 2013 list of the 100 Most Influential People in the World.
Alongside Kate Middleton, Michelle Obama and Beyoncé.The star of more than 300 films, Omotola – or “Omosexy”, as she is known to her legions of fans – is bigger across the African diaspora than Halle Berry.
Her reality-television show, Omotola: The Real Me, pulls in more viewers than Oprah’s and Tyra’s at their peak, combined, and she is the first African celebrity ever to amass more than one million Facebook “likes”.
When I meet her for the interview in a photographic studio in south-east London she is still recovering from getting mobbed by her Afro-Caribbean fan base in a nearby Tesco. “They practically had to shut down the store when people recognised me,” she says. “I actually got scared.”

Omotola is one of the biggest stars in Nollywood, the low-budget, high-output Nigerian film industry that churns out more English-language films than Hollywood or Bollywood (1,000-2,000 a year). Some have cinematic releases, but most are for the straight-to-video market.

When I watch her Stella photo-shoot from the sidelines it is immediately apparent that everything about her is BIG. Big body, big hair, big personality, big laugh: she comes across like Oprah’s sister.
She is here with her own film crew, who are recording for a future episode of her television show. Which means there is also a big, superstar delay – three hours – before our interview can start.
Many of her fans think her real name is “Omosexy”, she tells me, laughing, when we finally get to speak, but it was a nickname given to her by her husband, an airline pilot.

“He bought me a car back in 2009, and that was the plate number,” she recalls, speaking with kinetic, girlish excitement, rattling off sentences in fast, extended flurries.

“All my cars have special plate numbers, like Omotola 1.” When I ask how many cars she has, she laughs again, with embarrassment. “A few.” When she first saw her personalised licence plate she was horrified. “I thought, ‘Oh no!’ It sounded cocky.

As if I was telling everybody, ‘I’m sexy!’ Y’know-wha-I-mean?” She punctuates her sentences with this phrase, which she reels off as a single word.

The 35-year-old star has been acting since she was 16. Most recently she starred as Suzie, a passenger freshly spurned by her adulterous lover, in an aeroplane disaster movie, Last Flight to Abuja, which was the highest grossing film at the African box office last year.

Her breakthrough role came in 1995, in the Nollywood classic Mortal Inheritance, in which she played a sickle-cell patient fighting for her life. Since then she has established a staggering average of 16 films a year.

I put it to her that she must be the most prolific actress in the world. She laughs and shakes her head. “I am sure there are people who have beaten that record in Nigeria. Trust me.

It is easy to turn around with straight-to-video movies. It is the fashion to shoot until you drop, night and day. You have to remember that we are on very low budgets, so there is no time to wait.”
Nollywood began fewer than 20 years ago on the bustling streets of Lagos. Its pioneers were traders and bootleggers who started out selling copies of Hollywood films before graduating into producing their own titles as an inexpensive way to procure more content for a burgeoning market.

The traders finance the films (the average budget is £15,000-£30,000), then sell copies in bulk to local operators, who distribute them in markets, shops and street-corners for as little as £2 each.

The financial equation is problematic, with endemic piracy, issues over copyright and a lack of legally binding contracts.
Even so, what started as a ramshackle business is today worth an estimated £320 million a year, and rising. All this in a country that still lacks a reliable electricity supply.
What is the secret of Omotola’s appeal? “I don’t know,” she says, shrugging. “I wish someone would tell me! People can relate to me, I suppose. They feel as if they know me. A lot of my audience has grown up with me.”
At the same time, in a country that is heavily defined by religion and tradition, it helps that she is seen as a stable role model – a God-fearing woman who has been married to the same man for 17 years, and balances her work-life with bringing up four children.
Omotola Jalade Ekeinde was born into a middle-class family of strict Methodists in Lagos. Her father was the manager of the Lagos Country Club, while her mother worked for a local supermarket chain.
She has two younger brothers and was a tomboy, fiercely independent. “I used to scare boys from a very young age. They found me too much, because I knew what I wanted and I’d boss them around. In those days my mother would joke that I would never find a husband.”
As a child she was closest to her father. “He was a different kind of African man,” she recalls.
“He was very enlightened. He always asked me what I wanted, and encouraged me to speak up. He treated me like a boy.” He died in a car accident when Omotola was 12, while she was away at boarding-school.
“I didn’t grieve,” she says. “When I got home people were telling me that my mother had been crying for days, and that, as the eldest, I had to be strong for her and my brothers. I didn’t know what to do, so I just bottled everything up.
It affected me for many years afterwards. I was always very angry.”
Omotola would later play out her repressed grief on camera, using it as an emotional trigger to make herself cry whenever scripts called for it. But this soon created other problems.

“The director would shout, ‘Cut!’ and I’d still be crying,” she recalls. “I could bring the tears, but I could not control them. In the end I had to stop using that technique.”
At the age of 16 Omotola met her future husband, Matthew Ekeinde, then 26, in church. He was so keen on her that the day after their first meeting he showed up at her house unannounced.
“He soon became a friend of the family. He was almost like a father figure,” she says. “He’d drop my brothers at school and stuff.”
Ekeinde proposed when Omotola was 18. Initially, Omotola’s mother thought her daughter too young to marry, and asked Matthew to wait, but he refused. “She was really shocked,” says Omotola.
“She said, ‘If you want something badly enough you wait for it,’ but he said, ‘If I want something I take it.’ He was very, very bold. It was one of the things I found fascinating about him.”
They had two wedding ceremonies, the second of which took place on a flight from Lagos to Benin. “He’s amazing. If I weren’t married to him I couldn’t see myself with anybody else. I’m a handful.”
Ekeinde has become a reluctant poster boy for a new kind of African man.
“A lot of men come up to him and say, ‘You’re a real man – I can’t believe how you deal with it all.’ He also gets a lot of invitations from various bodies to speak about how he copes as a modern Nigerian man in a relationship with a powerful working woman.”
Omotola’s ascent to the Nollywood elite began the same year she met Ekeinde. She was modelling at the time. One afternoon she tagged along with a model friend who was attending a film audition.
“She didn’t get the part, and she came out and was very sad,” says Omotola. “Then she said, ‘Why don’t you go in and have a go?’
I said ‘OK,’ and went in and got the part. My friend wasn’t happy. That was the end of our friendship.”
Omotola has somehow also found the time to release three albums. And then there is her charitable work. “First and foremost I actually consider myself a humanitarian,” she says proudly.

She started in 2005, working with the United Nations as a World Food Programme ambassador. She now has her own foundation, the Omotola Youth Empowerment Programme.
“I have a lot of young people writing to me, feeling disillusioned. There’s so much injustice in Africa, and people’s lives being trampled on. The foundation was designed to give voice to these people.”
Her own voice has been greatly enhanced by the success of her reality-television show. It is the first show of its kind in Africa, watched by 150 million people across the continent. “
A lot of women say to me that I am their role model and example. They say, ‘If Omotola can do it, I can do it.’ I also get a lot of fan letters from men that say, ‘You are the reason I allow my wife to work, or pursue a career,’ because they see that I am married and that I am doing both.”
Omotola is now one of the most powerful people in what’s being called the “new Nollywood”, a fresh chapter for the industry, characterised by better scripts, improved production values and cinema rather than DVD-only releases.

But there are obstacles for the new Nollywood, not least the fact that Nigeria only has seven major cinemas, and that ticket prices are way beyond the reach of most citizens.
Nollywood’s biggest problem by far, however, is that its films – including Omotola’s – are still not very good. Theirs is a fuzzy, low-budget aesthetic in which histrionic acting combines with often ludicrous plot lines.
The films drown in melodrama, and many scenes are unintentionally comic. Production values and the rigours of plot and character development are dispensed with in the mad rush to complete and distribute.
It’s akin to half-cooking food to feed impatient mouths, and the results feel like first drafts. Nevertheless, African audiences don’t seem to care, as long as the films are cheap enough for a downtrodden public desperate for escapism, and they feature their own home-grown stars on screen.
So, what does the future hold for Omotola?
She recently made her American debut, in a television drama, Hit the Floor, opposite the R&B star Akon. Does she see her future as Nollywood or Hollywood?
“I’ll just go with the flow. We [in Nollywood] want to collaborate, we don’t want to leave. We are hoping to be the first film industry that will pull Hollywood in, instead of them pulling us out.”
This may not be such a crazy idea, as Hollywood sees the amounts invested in Nollywood, plus a potential audience of over one billion Africans (155 million in Nigeria alone).
Would she like to work with Spielberg? “Oh, please, let it be!” she says, clasping her hands together hopefully.
“Please! Everything happens for a reason.” I ask her if she took Spielberg’s number at that Time dinner. “Hello? I wouldn’t be African if I didn’t, now would I?”